You are here:
Contracting 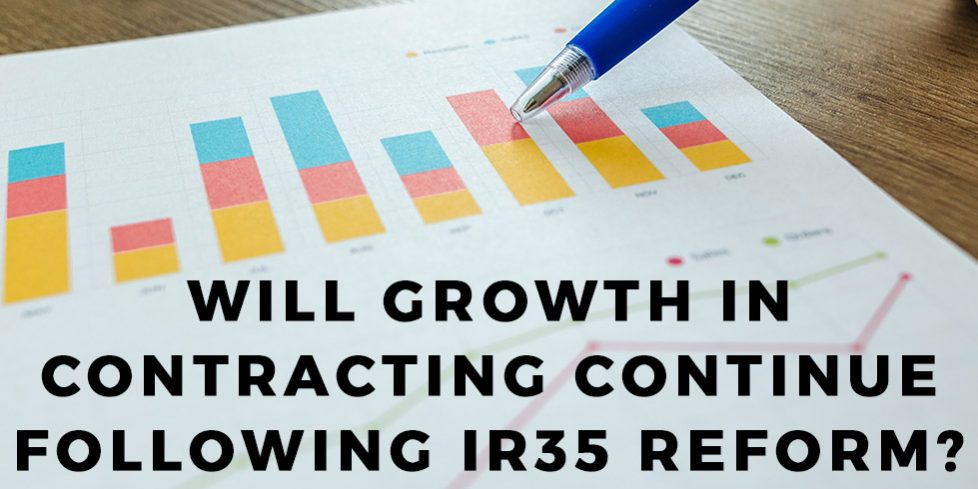 A key topic of debate in recent months has focused on whether growth in contracting will continue after further private sector IR35 reform. Unless you have been living under a rock, you will probably have noticed significant growth in the contracting and gig economy within the UK. Year on year growth in contracting has so far been pretty much relentless. However, some are starting to question if this is coming to an end.

The government have made clear that IR35 off-payroll reforms will be introduced into the private sector in April 2020. Some industry commentators believe these reforms present a massive shake up for the sector and potentially a deflationary force overall. Many feel that self-employment as a career choice is under threat altogether. IR35 reforms will effectively strangle the flexibility out of independent working, thereby pushing individuals towards working inside IR35 rules. The IPSE (Association of Independent Professionals and the Self-Employed) echoed these sentiments. They feel the changes will have a ‘catastrophic impact’ on contractors which may ‘force’ some individuals out of business altogether.

Alternatively there are those that remain optimistic about growth in contracting regardless of the incoming reforms. Whilst the list of people in support of the actual IR35 changes is a very short one indeed, some are confident the contracting sector will remain buoyant. If appropriate steps are taken then end clients will be able to make well-informed IR35 status decisions. This will allow their contractors to work confidently outside the scope of IR35.

Many parties however remain completely undecided and uncertain on the incoming changes. They understandably feel that the impact on the contracting sector is difficult to predict and forecast in the longer term. All three of these differing viewpoints were clearly evident in a recent survey of over 1400 independent workers. The survey revealed that 40% of contractors believe that growth in contracting will stall over the coming years. In contrast to this, only 20% of the sample thought that contracting will continue on its current growth trajectory. Needless to say, the remaining 40% sit somewhere in between these extremes and are unsure where things are heading. Worryingly these figures indicate that a massive 80% of independent workers do not have a clear positive outlook for the future.

It’s not too difficult to understand why this is the case. The IR35 off-payroll reforms in the public sector have been turbulent in the extreme. The shifting sands of IR35 have severely financially damaged thousands of contractors. Worse still is HMRC’s attitude and approach to these changes, which has left many, feeling utterly hopeless. If this wasn’t enough, the 2019 Loan Charge legislation is yet another example of damaging reforms which are perceived to be anti-contracting. For example the House of Lords were clear in their criticism of HMRC’s behaviour and attitude towards contractors with these changes.

The survey results are a clear indication that private sector end clients really need to start taking the incoming changes seriously. April 2020 may sound like some distant date in the future but it’s closer than many realise. The need to start preparing for the reform right now is becoming increasing apparent and pressing. HMRC recently promised in IR35 forum minutes to “provide support and guidance to help businesses implement the off-payroll working rules. They have also ensured the guidance is appropriate to the larger and more diverse public sector.”. If the private sector adopts a proactive approach to IR35 reform, then growth in contracting doesn’t necessarily need to take the nose dive many are predicting.